Expectant parents: Wait until baby is born to adopt pet

Highly-acclaimed children's books for your child or organization

Expectant parents: Wait until baby is born to adopt pet

My son and daughter-in-law are having their first baby in October. They have informed us that they plan on adopting a pit bull from a rescue. My wife and I are against it. We will fear not only for them but the baby. I know people say it’s how the dog is raised. How do you know how a dog is raised if it’s a rescue? There must be a reason why the pit bull is a rescue. The dog could have been mistreated. I do know that any dog can bite and cause harm. While vacationing in Denver, we found out that if you move into the area with a pit bull they will destroy the dog. It is illegal to own one. How should this be handled? Also, the apartment they live in is about 500 square feet.

Before I address your question about pit bulls, let’s talk about the adoption of a pet right before the arrival of a new baby. I see this happen a lot with expectant couples. They want their child to grow up with a dog, or they are “nesting” and think now is the perfect time to add a pet to the family.

Both are bad ideas. First, kids can begin growing up with a dog at any age. They don’t need to rush things. My son didn’t get his first dog until he was eight years old.

Second, adopting a dog right before a baby arrives is unfair to the dog. New parents are often exhausted and don’t have the time or energy to train a new dog and help him or her succeed in the home. If they can wait to adopt a dog until after the baby arrives, I think they will be in a better position to know what kind of time, energy, and financial resources they will have to devote to the care of a new pet – and the dog will benefit more from waiting too.

As for your question about pit bulls – a term that encompasses about 20 breeds of dogs – they are no different than any other dog. It’s not about how they were treated – almost all of Michael Vick’s fighting dogs got adopted into homes, and some even served as therapy pets during their lives. It’s about how they are being treated and socialized now. If a dog is raised in a home around people and with training, things are generally fine. If a dog, regardless of breed, is neglected or relegated to a back yard with little to no contact with people, he is more likely to bite or become aggressive. Shelters and rescue groups can behavior test and make a personality determination before putting a dog up for adoption.

As for breed specific legislation, many communities realize that breed bans don’t work. In fact, they often report the same or increased number of dog bites, perhaps because resources target dogs based on appearance rather than on behavior. So far, 20 states have passed provisions prohibiting cities from enacting breed discrimination provisions, and I expect this trend to continue.

Ironically, pit bull dogs were once America’s sweethearts, owned by several presidents, many celebrities, and even the children’s author Dr. Seuss. If you are getting ready to become grandparents, you may remember Petey from the Little Rascals. He was a pit bull dog.

With any pet, no matter how sweet and lovable, new parents must remember to never leave a baby or small child alone with that pet for any reason. Regardless of breed, that’s the single most important thing for new parents to remember with a dog.

Cathy M. Rosenthal is a longtime animal advocate, author, columnist and pet expert who has more than 25 years in the animal welfare field. Send your pet questions, stories and tips to cathy@petpundit.com. Please include your name, city, and state. You can follow her @cathymrosenthal

Sign up for one of Cathy's webinars to be inspired and grow in your love, compassion and understanding of the world's furry companions

Cathy brings more than 25 years' experience in the animal welfare field. She is a sought-after speaker, Certified Humane Education Specialist, a syndicated pet advice columnist, an author, a publisher, and of course - a loving pet parent.

Read more about Cathy here or check out her Non-Profit's page to see more ways she can help you and your organization.

Black, yellow, or chocolate, the Labrador Retriever is the nation's most popular dog, according to the AKC The American Kennel Club's top ten most popular breeds ...
Read More → 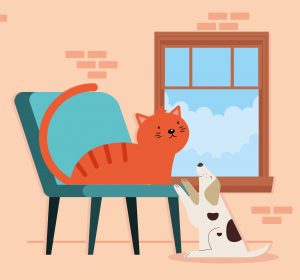 How to introduce a puppy to a home with two cats

Dear Cathy, We have two cats, and we’re thinking about getting a puppy. The cats are two years old. What suggestions do you have for ...
Read More →

Javelinas are peccaries, which are feral pig-like omnivores native to the southwestern United States, mostly Arizona. They have been known to viciously attack both pets ...
Read More →
×